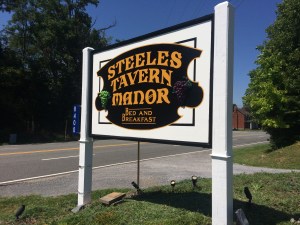 GOLD OR NO GOLD

What are options for renovating/rehabbing wood signs? Well, if they have gold leaf, the options are to either save and restore the gilding or repaint with paint only. This customer saved thousands of dollars in cost of gold by repainting the sign with only paint materials.

I received an e-mail in response to a sporadic newsletter I send to customers and prospects requesting an estimate on rehabilitating a wood sign for a local bed and breakfast establishment. The owners of the B&B needed an old sign repainted. The sign needing attention was built in the 1990’s. It was well-built from quality exterior marine grade plywood that was framed with hardwood and mounted to solid wood posts. I remember reading a news article about the sign fabricator, Frank Hawkins, who used to operate a sign business in Fairfield, Virginia near Lexington. Frank was from New England somewhere, maybe Vermont, where signs are well-built and maintained. When I first started in my own sign business back in 1990, I attended a sign 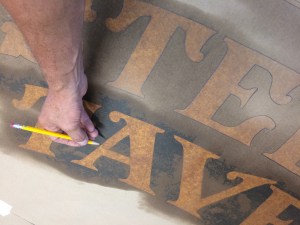 carving class in Stowe, Vermont, taught by expert carver, Jay Cooke. I remember thinking that I could share some of the craft I learned with businesses in Virginia, perhaps improving the aesthetics of our area with nice signage. From 1990-2000 when I owned and operated Tree Street Signs in Crimora, I believe I was able to do just that!

Getting back to my story about the B&B sign rehab project: The old sign was framed plywood, hand-painted with gold leaf letters and accent borders. The paint was chalking, fading and peeling a little after 25 years of service, and the gold leaf on the south side was pretty bad. The north side was salvageable, but the side with most sun exposure needed to be replaced. The client was most interested in making the sign background brighter, several times stating they thought 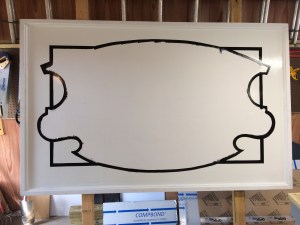 the colors of the old sign were just too drab. They wanted a white background with a black and gold color scheme. (Later on I found out they were originally from Pittsburgh, so the Pittsburgh Steelers’ black and gold color scheme was in the back of their mind in this decision.) They weren’t worried about losing the gold leaf as long as the renovated sign popped so people could read it well.

I’m posting a few pictures of the sign renovation process. First, I made a pattern from the old sign, which had a very neat design. I sanded and bleached the whole sign, both sides. Then I filled in any big problem areas with an epoxy filler. After that, I primed both sides with oil-based Zinsser Primer, and finished with One-Shot Bulletin Enamels. I pounced the pattern with chalk to use as a guideline for the re-lettering process. I used two coats of primer, two coats of white bulletin enamel and then two coats of black and gold enamel lettering. 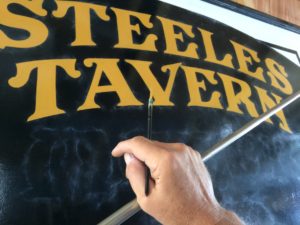 I and my helper, Marshall, installed the sign back onto its 6X6 wood posts after sanding and painting them in the field with Sherwin Williams white latex enamel house and trim paint. Since they were previously painted, the latex house paint will work well on the posts giving them a flexible finish to last a good long while.

The customers were pleased with the work. I recommended washing and waxing the sign every 6 months or so (Fall and Spring). I hope it helps get more attention than the old sign which was severely faded.